While the Japanese Imperial Army marched through Tokyo in 1936, fanning the flames of fascism and raising flags and guns, geisha maid Sada Abe was seen wandering the streets in a state of rapture waving the freshly severed genitals of her married lover Kichizo. Agreeably strangled by Sada during pursuit of the ultimate sexual high, Kichizo very likely left this world horizontally and with a painful grin on his face.

Oshima, himself a contradiction as eminent Japanese movie legend and the most notorious bad boy of cinema in defiance of conservative Japanese traditions, poses with In The Realm Of The Senses the philosophically seductive question: Does a form of government dictate the way people have sex?

And Oshima has expressed amusement about Western claims to know all about the Eastern mind in general. Especially American journalists who have made a habit of interpreting the boundless sexuality of In The Realm Of The Senses as a rebellion against Japanese inhibitions. He has made clear that his interest is more in raw instincts, and the connected social and political motivations beneath the layers of social etiquette.

In the film, Sada is a young prostitute laid off at a brothel, who has to start at the bottom of the food chain as a maid at a new one run by a married couple. The husband Kichizo routinely samples the women on a whim, and grabs Sada one day while she’s scrubbing the floors, “overwhelmed by the thought that her irresistible hips must have made men weep.” Though Kichizo only intended her as an appetizer to one of the in-house geishas, he’s bewitched by her sexual insatiability.

Eventually roles start to reverse, with Sada as the sexual aggressor and Kichizo viewing her as a ‘man eater’ who has taken possession of him sexually. And while the couple becomes ever more isolated, virtual prisoners of love in pursuit of superhuman sexual pleasure, they grow increasingly estranged and hostile to the world around them, abusing, assaulting and raping the servants who just want to come in and change the sheets. Drunk on lust and in a perpetual sexual stupor, for them public sex around town becomes no big deal. For purposes of pleasure, it’s the surrounding special effects that count.

They’re soon lured into the final unexplored realm: sado-masochism and lots of rough sex. Kichizo craves to be strangled, his suffocation heavily symbolic of the couple’s hermetically sealed world, and the rest is history.

The real clue to the film’s symbolism is in its more politely suggestive, alternate title, ‘Empire Of The Senses.’ For Oshima, the sexual fixation of his characters is surely not in opposition to, but parallels national values. With intimate human activities linked to social behavior, a deep connection forms between obsession and fanaticism. Feudal notions of absolute worship and mindless obedience are manifested in the couple’s relationship, along with self-isolation, insularity, suspicion and a predatory attitude toward the outside world, which also characterized Imperial Japan. Here, the assisted sexual suicide of Kichizo is not unconnected to kamikaze fever, and also potentially interchangeable is the unhealthy worship of an emperor or a lover’s sexual equipment.

Oshima told me in an exclusive interview that “the biggest influence on me as a filmmaker was the defeat of Japan in WW II. Perhaps the basic feeling it left me with is that this world is absurd.” The director talked about his involvement as a rebellious leader in student movements, and how he has been a target of censorship by government authorities as a defiant independent filmmaker. (In The Realm Of The Senses was smuggled secretly into France for editing, banned in Japan, and seized by U.S. Customs just before its scheduled screening at the 1976 NY Film Festival). “It was an age of change in Japan after WW II, so we expected Japan would change very much. But all that happened is that it became Americanized.”

“Everything went back to the past and we were very disappointed, we fought this tendency. Also, the war in Korea started, and we feared the return of Japanese militarism, so we fought Japanese authority. We wanted to destroy conventional morality in Japan, and we expected to find something new. I thought my filmmaking and my existence itself was a form of social protest.”

Oshima, who in person startles with his level of intensity and energy for a senior citizen, has a passionate commitment to his art that seems to well up from the same uninhibited sensuality that saturates In The Realm Of The Senses. It nearly borders on the auto-erotic, in a cerebral kind of way. 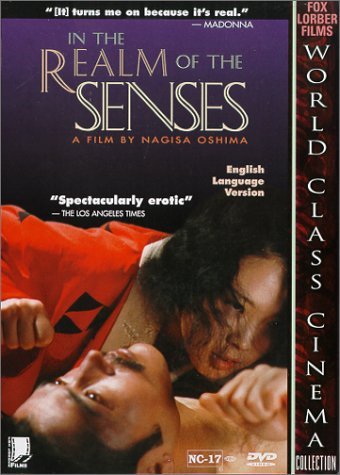 “I want to provocate myself first of all, with my films,” he said with a mischievous smile as he struggled to express himself with only a partially mastered but fascinating sense of the English language. “I’m very happy if my films provocate people. I don’t want to be tied to any subject or any way of filmmaking. If not, I can’t make a good movie. I like to be very free when I make a film. This kind of challenge excites me, I want to be excited by myself.”