I know it’s a little early in the season, but if you’re ready for a Halloween-themed flick that’s going to be lot of fun for the whole family, have I got a cartoon for you. More romantic and funny than spooky and spine-tingling, Hotel Transylvania is a tenderhearted tale that milks most of its mirth by turning a basic scary movie convention on its head.

For, the picture unfolds from the point-of-view of Count Dracula (Adam Sandler) and a beleaguered brotherhood of peace-loving creatures who have not only been unfairly-demonized as monsters but are actually more afraid of humans than we are of them. Who knew? Victims of bad press and paranoia, they naturally shy away from making any contact with humans. 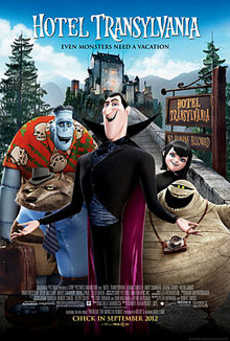 After his wife’s untimely demise at the hands of an angry mob, an understandably overprotective Dracula restricted his daughter, Mavis (Selena Gomez), to the safe confines of the family’s hilltop mansion, far removed from any prejudiced townsfolk armed with torches and pitchforks. Inside that protective bubble, “Daddy’s Little Ghoul” was raised on misleading nursery rhymes in which all the evil villains were people.

Figuring his fellow social outcasts might also enjoy a sanctuary of tranquility safe from humanity, Dracula transforms his sprawling estate into the Hotel Transylvania, a swanky, 5-stake (ala “5-star”) resort catering strictly to fellow monsters. The plot thickens when he lowers the drawbridge over the moat to the castle to welcome his friends to celebrate Mavis’ birthday.

A hiker who just stumbled upon the place slips in alongsideFrankenstein (Kevin James), The Mummy (CeeLo Green), The Werewolf (Steve Buscemi), Quasimodo (Jon Lovitz), The Invisible Man (David Spade) and the other invited guests. Jonathan (Andy Samberg) may be a mere mortal, but the clueless party crasher’s just the right age to appreciate the blossoming beauty of a rebellious teen vampire with raging hormones.

It’s cross-species love at first sight, much to the chagrin of an exasperated Count Dracula whose desperate efforts to discourage his suddenly-defiant daughter prove futile. His cries of “You’re barely out of your training fangs!” and “There are so many eligible monsters!” fall on deaf ears, as Mavis opts instead to heed her late-mother’s sage suggestion that “A zing comes along only once in a life.”

A tyke-friendly, Halloween adventure teaching a universal message of tolerance via the oft-repeated maxim that monsters are people, too!

To see a trailer for Hotel Transylvania: