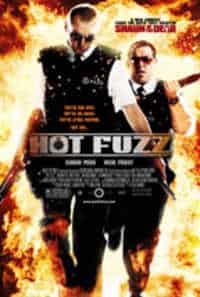 With an arrest rate four times that of anyone else on the force, Nicholas Angel (Simon Pegg) is London’s most highly-decorated cop. But instead of appreciating the efforts of their department’s star, his colleagues are upset that all those commendations for bravery are only making them look bad. His superiors’ solution is to reward the overzealous officer with a promotion to sergeant while simultaneously transferring him to a precinct far away from the city.

Nick’s new beat is in quaint little Sandford, a picturesque village which looks like a relic of a bygone era. The idyllic oasis has remained crime-free by virtue of the tireless efforts of its Neighborhood Watch Association (NWA).

This self-appointed committee of nitpicking town elders micro-manages every aspect of their fellow citizens’ daily life, mandating compliance with regulations which have turned most into Stepford Wives-level zombies.

With the NWA already regulating behavior so successfully, it’s no surprise that the only person to greet Nicholas’ arrival with any enthusiasm is his new partner, Danny (Nick Frost), the wide-eyed son of the chief of police (Jim Broadbent). Danny only daydreams of participating in spectacular gunfights and car chases like the heroes of his favorite action flicks, because a crime hasn’t been committed in sleepy Sandford in ages. 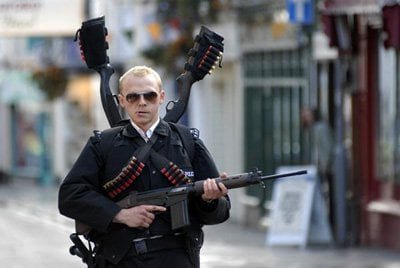 Fortunately, it doesn’t take Sergeant Angel long to detect that there’s something suspicious about the alarming number of accidental deaths in town. And as he starts to scratch below the surface, it becomes readily apparent that the killings are the work of a vigilante taking the law into his or her own hands.

So, it falls to Nick and Danny to discern which of these seemingly-saintly model citizens might be behind the string of staged murders, and the gumshoes’ employ an array of increasingly gruesome methods to crack the case wide open. Hot Fuzz is an over-the-top action extravaganza brought to you by the same British blokes behind Shaun of the Dead. But instead of parodying horror flicks, here, they’re lampooning the murder mystery genre.

Early on, this snail-paced adventure gets bogged down by at least a half-hour’s worth of dead time needlessly squandered establishing the premise. Still, the ingenious ways in which hell is ultimately unleashed makes the wait worthwhile. 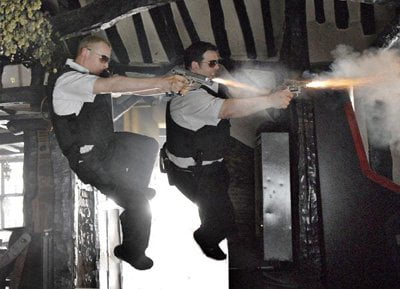 Warning, unless you’re comfortable with the work of Sam Peckinpah, John Woo and other purveyors of pornographic bloodletting, you might have a hard time appreciating this sick brand of laugh-linked slaughter.

Regardless, kudos are again in order for co-stars Simon Pegg and Nick Frost for re-generating the chemistry which made Shaun of the Dead such a cult hit. Their stellar supporting cast is topped by Bill Nighy and Timothy Dalton, with Peter Jackson and Cate Blanchett also appearing in uncredited cameos.

Though coarse cockney accents occasionally render the dialogue inscrutable, not to worry. For an inability to follow the plot of this high body-count takeoff won’t diminish one’s enjoyment of the visually-dispassionate dispatching of humans as cinematic road kill. Bloody funny bloodletting, if that’s your thing.