January is a time when Hollywood studios are known to foist junk on the unsuspecting public. A clue that this might be the case with Epic Movie is that the film was not made available to critics for screening prior to its release, usually a sure sign of a plan to “pump and dump” a turkey. The marketing strategy involves bypassing reviewers while hyping the movie by putting the best scenes in the TV ads in order to make as much money as possible on opening weekend before word of mouth has had a chance to spread. 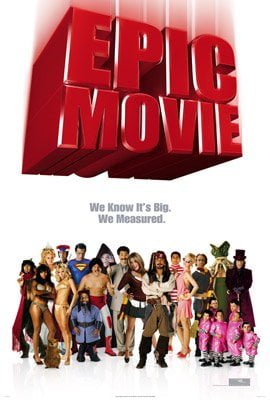 Epic Movie, a sophomoric spoof of the Hollywood blockbuster, relies on the familiar formula already employed by Scary Movie and Date Movie. The good news is that it’s actually not nearly as bad as anticipated. But the bad news is that I wasn’t expecting much and the laughs are still few and far between. Worse, this bottom-feeder is so relentlessly crude, profane and vulgar that it truly deserves an R instead of its kid-friendly PG-13 rating.

At least it does have the rudiments of a plot which is more than can be said for most of the parody genre. The story revolves around a quartet of orphans, each a refugee from a recent hit flick. Lucy (Jayma Mays) is based on Sophie from The Da Vinci Code, the detective descended from Christ. Edward (Kal Penn) is patterned after Esqueleto, Jack Black’s homeless sidekick in Nacho Libre. Susan (Faune Chambers), a character inspired by Snakes on a Plane, is flying to meet her adoptive celebrity parents, Bradgelina, when all hell breaks loose aboard the aircraft because of, you guessed it, snakes on the plane. And finally, Peter (Adam Campbell) is an X-Men reject sans superpowers.

After introductory sequences featuring sketches from each of the aforementioned films, the four meet at a chocolate factory where they discover a magical wardrobe which deposits them in the Land of Gnarnia where they encounter a flamboyant pirate (Darrell Hammond), a boy wizard (Kevin McDonald) and an evil white bitch (Jennifer Coolidge). 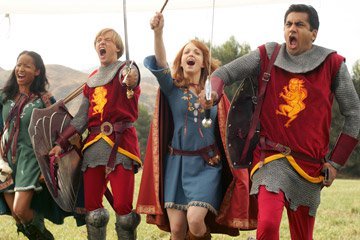 The problem with the picture is that it makes no effort to appeal to anything but the lowest common denominator, whether that be via fart jokes, urination humor, projectile vomiting, or a litany of lewd asides. So, instead of offering any enlightening insights, the idea here is nothing deeper than to make references in the most infantile fashion imaginable. Besides takeoffs on recent movies (Borat, Talledega Nights, Mission: Impossible, Hustle & Flow, Casino Royale, Click, The Fast and the Furious, etcetera), the film makes lame attempts to poke fun at individuals like Paris “Am I annoying?” Hilton, and Kanye “George Bush doesn’t care about black people” West. It also lampoons popular television shows such as MTV’s Cribs where we get to see a gangsta’ rapper boast about his conspicuous consumption while his nearly naked video ho pours Cristal champagne over her implants.

Can a picture really be considered a parody if it merely parrots rather than satirizes its source material?