Even though I was raised in the church and attended services religiously as a child, I was simultaneously warned by my skeptical grandmother that sometimes, “The closer supposedly to Christ, the further from God.” That sage old saying came to mind while watching Believe Me, an intriguing modern morality play written and directed by Will Bakke (Beware of Christians).

The story revolves around the ethical issues confronting Sam Atwell (Alex Russell), a law school-bound college senior, or at least he thought. Trouble is, his parents suddenly can’t afford to pay his final semester’s tuition which means he won’t be able to graduate on time or continue his education the following fall.

This is the predicament we find the handsome upperclassman facing at the picture’s point of departure, a time when he’d really rather be hazing pledges to his fraternity and hooking up with cute coeds he meets at keg parties. And after a futile visit with the unsympathetic school dean (Nick Offerman), Sam knows he simply has to come up with the $9,000 somehow, if he wants to get that degree in June. 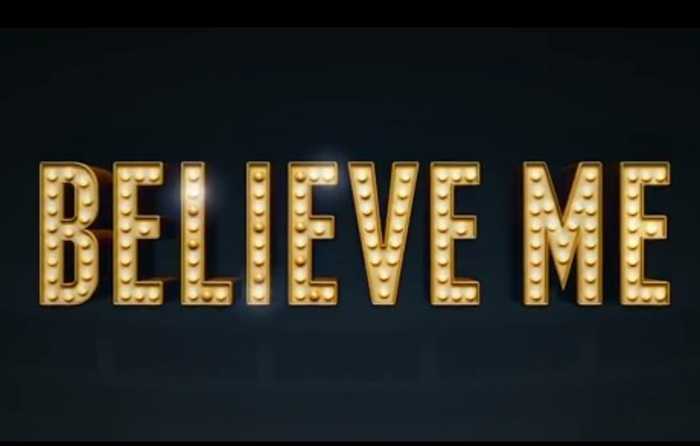 Thinking outside the box, he concocts an elaborate scheme to separate gullible Evangelicals from their cash, figuring them to be a soft touch. So, he enlists the assistance of a few of his frat brothers in the nefarious endeavor, namely, Pierce (Miles Fisher), Tyler (Sinqua Wells) and Baker (Max Adler).

The plan is to prevail upon Born Again congregations by posing as a Christian charity assisting needy children in Africa. In due course, Sam proves to be such a good pitchman that the money starts flooding in.

That development is not lost on Ken (Christopher McDonald), a faith-oriented entrepreneur who offers to help take the boys’ burgeoning business to the next level. Soon, as the God Squad, they’re on the prayer meeting tent circuit and selling a Christian clothing line called Cross Dressing that includes “F-Satan” t-shirts and the like.

However, the sinful scheme begins to unravel when they have no place to send a kid (Chester Rushing) who wants to do missionary work with them in Lesotho. And the moment of truth arrives when the pretty tour coordinator (Johanna Braddy) Sam’s just started dating is given proof by a colleague (Zachary Knighton) that her new beau is a big fraud.

At this juncture, the jig is essentially up, whether or not the arrogant co-conspirators are too blinded by a combination of cynicism and greed to confess to the crime. After all, they’d taken such glee in exploiting foolish followers of Christ by strategically faking everything from appropriately-pious poses to the right religious buzzwords.

A thought-provoking, faith-based parable asking whether it’s ever too late to make a second impression, especially on God.

See a trailer for Believe Me