This riveting, true story should make compelling viewing but, unfortunately, it misses the mark because the writers skip over the emotional information we need to draw us in, too much time is spent on irrelevant scenes and Sean Penn, the only cast member with the power to carry a film, is given far too little screen time. But it’s still an interesting yarn and once word gets out that this is another Bush Basher, people will turn out in droves. So George has a purpose at last.

Valerie Plame (Naomi Watts) is a covert officer in the CIA and is married to Joe Wilson (Sean Penn), the former Ambassador to Niger. All attention is on Iraq and the question of whether they have purchased uranium enriched aluminum tubes. Plame, Wilson and two other reliable sources independently prove they have not, but the government ignores their findings and declares war. Wilson is incensed, publishes his report in the New York Times, Plame’s spy status is leaked to the press and a second war, this time on the home front, is launched. 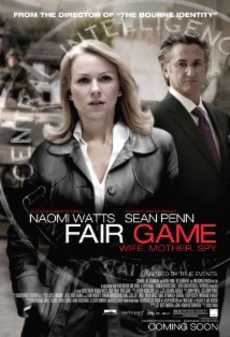 Part of Plame’s job is to enlist international sources and to this end she contacts a US resident, the sister of an Iraqi scientist. Plame asks her to ask her brother to work covertly for the agency but the sister refuses, saying she doesn’t trust Plame. But the next time we see the sister she is memorizing questions to ask her brother on her impending trip to Iraq. These are intriguing scenes but for us to be captivated we need to see how Plame turns the sister around so we can see exactly how much of her soul she is prepared to sell. This would not only define our hero but possibly give her credibility as a CIA agent, which she lacks.

But the fatal omissions are in the Plame/Wilson relationship. They have comparatively little screen time together and we never know if Wilson is proud of his wife’s achievements or if he resents them. Also, it’s beyond belief that he doesn’t discuss with her his article prior to publication and we never even get her reaction, which is a searing oversight. Another conundrum is why we see her kiss her children goodbye but forget to kiss her husband, the latter being at odds with what the writers want us to believe at the end.

There is a lot of mention of aluminum in this film, which all other countries refer to as aluminum. Aluminum is one of the metallic elements and should therefore end in -ium, as do magnesium and chromium. The reason it doesn’t is because when the first American Dictionary was compiled, a typo was made, the ‘i’ was omitted, and instead of five syllables there were four. This is just as well, as hearing Bush try to pronounce such a long word would be painful and if he was to start insisting that we were about to be attacked by weapons of ‘nuclear aluminum’, we’d have no idea what he was talking about.