Movies by and about women don’t necessarily, sorry to say, identify with women. In disappointing contrast to Italian director Cecilia Miniucchi’s Expired, where Samantha Morton informs her macho moron leading man, ‘You don’t make love to a body, you make love to a woman,’ in Spanish filmmaker Isabel Coixet’s Elegy, Penelope Cruz’s gullible college coed swoons when the lecherous lecturer played by Ben Kingsley confesses that he’s fallen in love with her breasts. You’ve come a long way backwards, baby.

Based on the Philip Roth novella, The Dying Animal, Elegy is one of those pseudo-intellectual romps in which the classical music backdrop, fine wines and high minded existential gab as cunning seductive foreplay, make its run of the mill sleazy sexism all right. Ben Kingsley is David Kapesh in Elegy, an aging divorced English Literature professor at Columbia University, who seems to have made his career choice based on all the worshipful young coeds he can charm into bed on a regular basis.

But the tables are turned when Kapesh is hit with a late midlife crisis schoolboy crush on his student Consuela (Penelope Cruz), a mysterious Cuban-American with a provocative air of elusive innocence. Assuming a rationalized role as Conseula’s educational advisor, Kapesh dedicates himself to assisting this female whom he’s certain ‘isn’t sure what to do with her beauty,’ while violating his own cardinal rule that he’ll never seduce his students ‘until they’ve gotten their grades.’ 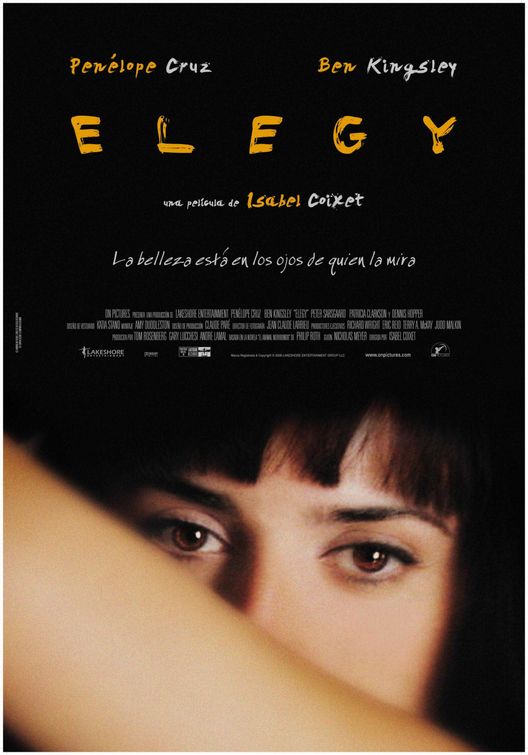 As a heated romance materializes between the two, Kapesh is also cheating on his longtime middle aged lover, Carolyn (Patricia Clarkson, in her second, increasingly typecast older actress role in less than a year, after Married Life, where she’s likewise dumped for a younger woman). But it’s an okay, guilt-free betrayal folks, because Carolyn is only interested in pure sex in a permanent relationship. Whew. In any case, to sum up these shady proceedings, Kapesh announces to himself, ‘We talked about Kafka and Goya’ Words of wisdom from his colleague and friend (Dennis Hopper) to break off this destructive and doomed relationship, go unheeded.

Eventually lust for her young body that he has objectified into a tantalizing work of art, morphs into obsession. And Kapesh is overcome with high anxiety that Conseula will eventually leave her lover over thirty years her senior, for a younger man. And soon his possessiveness begins to drive her away.

Elegy holds initial interest as an intelligent, introspective mood piece about the inevitable mirrored mortality of life and love. But the movie wears out its welcome from too much sulking and its digression into disease of the week fare, with at least two illnesses on hand.

On a side note, the NYC Columbia University setting by way of Vancouver, is an additional false irritant. And as a graduate of Columbia, I can attest to the fact that this movie college that plays out more like a male fantasyland party hard, 24/7 sex den rather than a serious and transformative learning experience enclave, could only exist on another planet.