What with the rabid quest for dwindling supplies of oil on an increasingly depleted Planet Earth these days, likewise running amok on screen is imperialism as predatory metaphor, in Avatar and now the post-apocalyptic vampire binge Daybreakers not far behind. Which is not far fetched at all, considering that hemoglobin guzzlers of ancient lore like Count Dracula aka Vlad The Impaler, symbolized for the fearful masses a brutal and exploitative ruling class treachery of supernatural magnitude, that did so to speak seem to bleed them dry.

Written and directed with macabre relish by Australian siblings Michael and Peter Spierig (Undead), Daybreakers stars Ethan Hawke as Edward Dalton, a scientist deeply into worrying about the deteriorating world situation in 2019. A vampire himself but one practicing discipline, restraint and creature etiquette at all costs, Dalton refuses to imbibe human blood and opts instead for a less satisfying substitute thirst quencher.

Not so for all those relatively unenlightened, born again appetite challenged bloodsuckers currently overpopulating the planet, and bent on draining the few, nearly extinct humans understandably in hiding. Including malevolent corporate suit Charles Bromley (Sam Neill) who avidly turned vampire without a second thought, not only to survive terminal cancer, but to attain immortality as well in the bargain. In contrast to Dalton’s more cynical outlook on life, summed up in the thought, ‘Life’s a bitch, and then you won’t die.’ 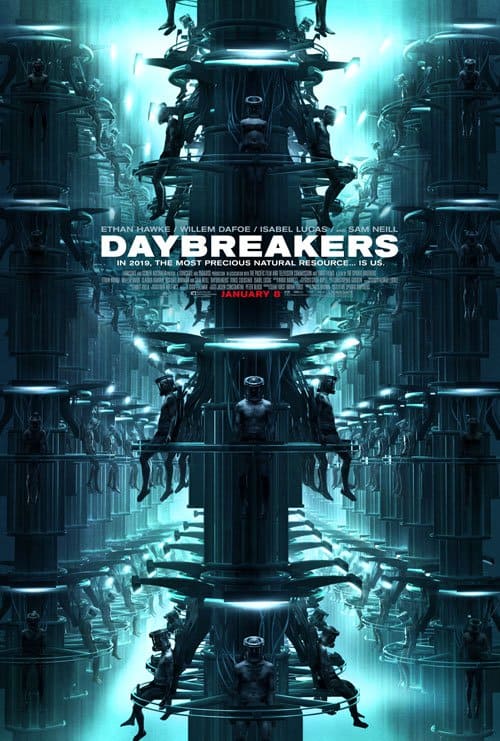 Which is just about the sum total of humor in this dreary, morbid cinematic ordeal, as humans and parched vampires engage in endless skirmishes of fast food hide and seek. While corporate meanies go about concocting efficient farming and drainage systems of homo sapiens in captivity, along with futuristic synthetic blood profiteering. An alternative master plan which also happens to be a dream mulled by Dalton, but for very different reasons. And he’s now in league with a band of similarly abstinent, brawling turncoat insurgents into vampire sobriety, and led by ruthlessly determined Lionel ‘Elvis’ Cormac (Willem Dafoe), as Dalton gets frantically motivated, not by greed, but in a race for the cure.

While Daybreakers boasts several truly freaky when not surreal interludes involving terrifying vampires and squeamish meat market experimentation on doomed humans, the proceedings are fatally bogged down by too many convoluted cautionary plot points and famished feeding frenzy detours. A little more subtlety and less emphasis on pigging out for its own sake, would have gone a long way towards appeasing audience appetites for a satisfying horror thriller instead.