This is a children’s film with a plot too complicated for many adults to understand and with so much explanatory dialogue it sometimes feels like a lecture. There’s absolutely no humor for anyone and much is made of a picture of an engine, the likes of which most kids under the age of 16 will never have seen. To say the filmmakers are out of touch with their audience is an understatement.

Lightning McQueen, (voice of Owen Wilson) is a racecar and his friend Mater (voice of Larry the Cable Guy) is a tow truck. The two leave their U.S. hometown for Europe when Lightning decides to compete in the World Grand Prix. Meanwhile, two British spy cars, Finn McMissile (voice of Michael Caine) and Holley Shiftwell (voice of Emily Mortimer), are embroiled in a top-secret espionage mission and they mistakenly believe Mater to be their undercover agent. He unwittingly goes along with their scheme. 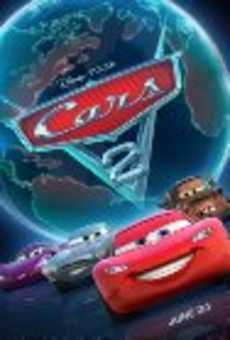 There are two major plotlines in this film; one is about espionage, the other about car racing. There are also two themes; one is about friendship, the other is about not judging people by their looks. These unrelated ideas are juxtaposed and as they make their convoluted way along the story’s path they repeatedly crash into each other but never share anything more than screen time. It all makes little sense and in the end is really quite meaningless.

The characters are all one-dimensional and the different makes of cars have been thrown together with very little thought. Some have badges on the hood, some do not; most are old models, the odd one is new. The British Finn McMissile is a British Aston Martin; the British Holley Shiftwell is an American Corvette (or something that looks like a Corvette). The only vehicle that makes sense is a Rolls Royce with a crown, who is Her Majesty the Queen. It’s an obvious royal choice but so was a British car for Holley Shiftwell, and the filmmakers completely missed that one.

Apart from the adult storyline, there’s also a lot of jargon that will go flying over a young audience’s head, and as this all becomes obvious within the first five minutes, it raises the question as to how this film ever got made. Is it possible no one at Disney has got kids, or if they have, they’re too busy to talk to them? This is a pity, because if they’d told their 6 year-old about their latest project the children’s response would have ensured it got cancelled, then Dad could have come home early and read a few bedtime stories and discovered that fairy tales aren’t about multi-layered espionage with reusable energy sub-plots. It really is that obvious.