Back in the Fifties, there was an explosion of low-budget, sci-fi flicks from Japan featuring an array of enormous mutants ostensibly created by the fallout from the radiation of the atomic bombs dropped on Hiroshima and Nagasaki. Although this film is, by design, reminiscent of those cheesy, badly-dubbed, black & white productions, writer/director/star Hitoshi Matsumoto has come up with a clever enough variation on the theme to refresh the genre thoroughly.

The movie is essentially a mockumentary in which a camera crew with a nagging narrator (Tomoji Hasegawa) follows around a middle-aged man named Masaru Daisatou (Matsumoto). He’s down on his luck despite having the ability to morph into a powerful giant who comes to the rescue whenever a monster suddenly starts to attack Tokyo. 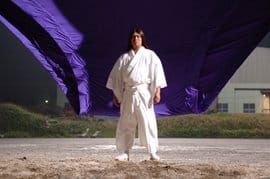 First, he rushes down to the electric company where he is turned into his superhero alter ego, Big Man Japan, with the help of thousands of volts of electricity. Then, among the worthy adversaries we get to see him engage in battle against the backdrop of the Tokyo skyline are the Strangling Monster, the Leaping Monster, the Evil Stare Monster, the Stink Monster and the Child Monster. But even eradicating these dangerous enemies doesn’t bring Masaru much joy.

The reasons why he’s such a sad sack are plentiful. First of all, he’s separated from his wife who has found herself a new lover. Second, he hasn’t seen his 8 year-old daughter in 6 months. Then, there’s the fact that he’s the last surviving member of a dying breed which is no longer appreciated by his fellow countrymen.

We learn that in their heyday, there were as many as 30 superheroes roaming around simultaneously, including Masaru’s own father and grandfather. But now he’s the only one, and he even needs the help of his agent (Ua) just to maintain a positive image, especially after slaying the innocent-looking Child Monster.

Blending the best elements of Hancock, Godzilla and This Is Spinal Tap, Big Man Japan is likely to work for you to the extent you’re willing to endure special effects almost as cheap as those in the original bad B-flicks being lampooned. Makes you almost nostalgic for some of the worst cinematic offerings ever to come out of the Orient, including such crappy classics as Rodan, Mothra and the Giant Behemoth.

In Japanese with subtitles.

To see a trailer for Big Man Japan,