This film is about two people who are kind and giving, and three people who are needy. Together they dance the perfect dance, unaware that they have to stay in step to fill the gaps of them all. It’s a compassionately told character driven drama that stays true to its genre and a story that can be enjoyed by all, but especially the lonely and the apparently perfect.

Tom and Gerri Wilkins have been married for over thirty years. He’s a geologist, she’s a councilor, and they spend all their spare time at their allotment. They have regular visits from their son, Joe, and frequent visits from Mary, Gerri’s friend and colleague. When Tom’s brother suddenly loses his wife they take care of everything, including the widower. 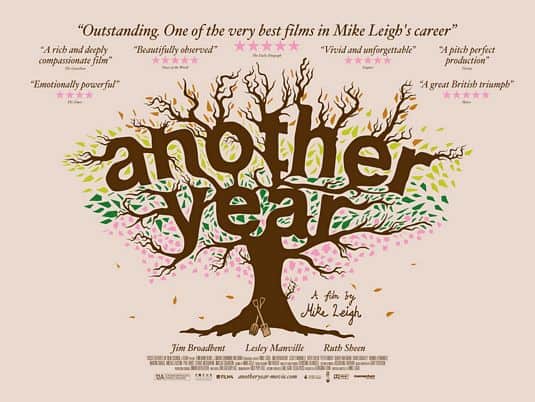 This story is strongly themed. The four seasons are visualized by Tom and Gerry’s planting and nurturing of fruit and vegetables at their allotment. When they come home, they continue to nurture the many waifs and strays in their lives who, of course, have been hand picked by the couple so that their co-dependency can continue; the two saints need the sinners to reassure them that they really are as happy and wholesome as they would have us believe.

With so many lives filled with despair, this could be a depressing story, but it’s not, because we hope the rock-steady couple will stop feeding the needy, make them stand on their own and, in the end, all will be well. But, unfortunately, that’s just what this film lacks – an end. It’s a slice of life with not even an attempt made at a resolution and it’s hard not to feel cheated after we so willingly joined them on the journeys they took.

So, for another year, Tom and Gerri will keep tending their allotment and their visitors unless, of course, the latter start to take responsibility for themselves, which is the clear message the writer wants to send. The motivation to do this, like anything else, must come from within, not from other people and most definitely not from the myriad of seminars and books that are being peddled, aimed at people just like the vulnerable souls who turn up on the Wilkins’ doorstep, ready for the music to start.

Written and Directed by Mike Leigh