Any account of war told through a subjective eye and presented as a ‘true story,’ must always be approached with caution, while tempered with sympathy for its victims. All of which makes the task of the movie critic ever more difficult, as the line between journalism and film increasingly narrows. And avoiding the pitfalls of being spontaneously relegated to passive stenographer with a movie like German director Max Farberbock’s A Woman In Berlin [Anonyma: Eine Frau in Berlin] is rendered all the more difficult and complex, as a historically decontextualized personal story of a Nazi victim during WWII.

Based on a long banned European bestseller shocker credited to a Nazi period female journalist referred to as ‘Anonyma,’ and that was first published in Switzerland in the 1950s, A Woman In Berlin stars Nina Hoss as the writer in question. Prior to the outbreak of WWII, she’s a devout Hitler supporter, ‘intoxicated’ with unwavering faith in the ultimate victory of Hitler. And in particular in combat against the Soviets, whom she derides contemptuously as an inferior race. 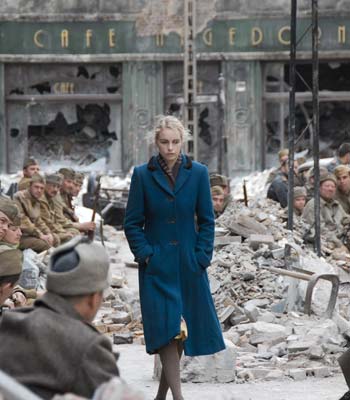 But when the Soviet Red Army advances triumphantly into Berlin and local women are routinely raped by the invaders, Anonyma, a rape survivor herself, concludes that the only way she can proactively take control over her dismal situation and over her own body as passive victim, is to select a high ranking Red Army commander as her lover, and also protector against further random rape. She does so by simply walking up to Andrej (Evgeny Sidikhin) in her disheveled state, and ordering him to be her boyfriend, a scene which seems cut from the cloth of fantasy, to say the least. Though it is to Anonyma’s advantage that as an international journalist, she is one of the very few locals there who speaks Russian.

A Woman In Berlin is a remarkable depiction of human survival skills in the midst of war, not in the conventional sense pertaining to male soldiers in war movies, but rather women caught up in military conflict as their own gender specific civilian battlefield basic instincts kick in. And to survive the enduring presence of threatened death along with sexual violence and exploitation, many indeed succumbed to the Stockholm Syndrome and engaged the invaders as lovers, and across all national lines. And the manner in which this sexual and psychological behavior came to pass, is portrayed in this film in chilling clinical detail and also balanced empathy for the human condition in general.

On the other hand, there is a great deal absent from this personal chronicle, in particular as it is alleged to be penned by a journalist who would be anticipated to have a far more universal point of view. For instance, the suffering of these Berlin women, however tragic, is decontextualized from the infinitely greater crimes against humanity’s millions by Germany at the time, which in fact was responsible for their fate. And the rage of the Red Army soldiers is barely linked to German culpability, with the death of 27 million Russian masses never mentioned. Nor is the fact that, aside from random rape by German soldiers themselves, hundreds of rape trials were conducted against American and French WWII army rapists. Not to mention the many French women whose tresses were chopped off for sleeping with the German enemy.

And while one man’s war in inevitably another man’s murder, with lines between crime and battle inevitably woefully blurred, the lessons regarding the horrors of human conflict are never learned. This, as a book about US treachery against Iraqi civilians has similarly been banned in this country as was Eine Frau in Berlin, and exists only in a French version.

And as a footnote to A Woman In Berlin, the official record indicates that historians are in agreement that, contrary to what is professed in this film, there were no orders from Soviet commanders in 1945 to engage in mass rape. While in this current direction within Germany to switch up their national perspective from historical remorse to indignation, there is a not necessarily coincidental simultaneous campaign in European countries, to embark on a neo-red scare in order to officially outlaw communist parties, in the face of a current resurgence in their popularity there. No insignificant factor, whether in movies or journalism.