Considering his aversion to razors and shaving cream, it’s amazing that Johnny Depp ever managed to get through Sweeney Todd playing a barber chair throat slashing serial killer, let alone accepting the role in the first place. And his close shave literally, while malevolently grooming co-star Alan Rickman as he recalled nervously during this interview, didn’t help matters.

Depp also described in detail his elaborate method for overcoming stage fright when faced with having to sing in the movie, despite collaborating on guitar with Oasis and appearing in a Tom Petty video. Some light was also shed on the secret of his strange longtime rapport with Sweeney Todd director Tim Burton on a string of movies with magical tendencies like Sleepy Hollow and Corpse Bride. And it apparently has something to do with how fascinating and out of their minds people can be, especially the normal ones. 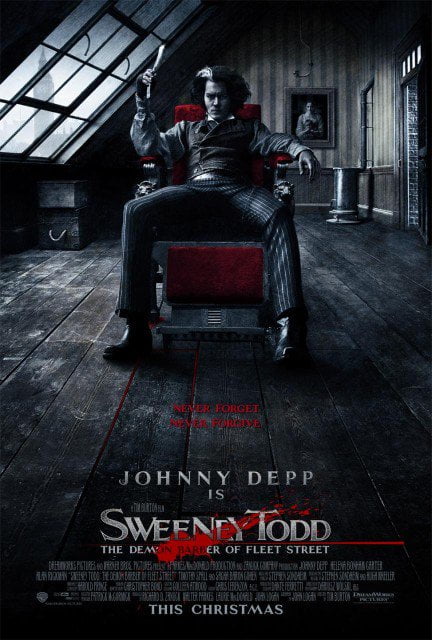 Do you think Sweeney Todd is insane?

JOHNNY DEPP: He probably ended up in the very end in an unpleasant place! But the process was very organic, in the sense that he started out as a victim and became obsessed with the idea of revenge.

Did it come easy to you, to be a serial killer?

JD: Well, having worked with sharp objects before, I thought everything was fine. Until I actually had to shave someone! That made me real nervous.

I hear you had a hard time especially with Alan Rickman, and that shaving cream.

JD: The shaving cream made me really nervous. It was one of the most uncomfortable moments of my life. As it would be! Poor Alan! He wasn’t screaming, but I think that he really didn’t…enjoy it! So in that sense, I’m sure he hated working with me.

But now I can definitely appreciate it. Because when you get into the chair with a stranger and they lather your face up with sharp instruments around your throat, it’s frightening!

You didn’t go to barber school or anything, to get into character?

JD: No, no. But at the same time, I didn’t go out and slash anyone’s throat! That you know of.

This movie almost didn’t get made, after your daughter Lily Rose became seriously ill and you had to leave the film set. What was that like for you?

JD: Well, I don’t know what anyone else’s feelings were at the time, whether I was coming back or if I wasn’t coming back. And I wasn’t sure if I’d be able to come back. Nothing is more important to me than my family. My kids and my girl, there’s nothing else that matters in life.

What has it been like for you as a dad?

JD: My kids are very grounded, not monster-like at all. We keep the discipline factor under control. But from what I understand, I used to piss my mother off. I did a lot of practical jokes. But I have to say that some of the greatest advice I ever got in my life, was from my mom.

And what was that?

JD: Don’t ever take any shit from anybody. Ever. That has stuck with me. And I hope my kids never have to take shit off anybody either.

What made you decide to go for it, and sing your way through this movie?

And I started to record the songs to see if I could get over the initial fear of that type of exposure. But my instinct told me, it doesn’t matter if you know how to sing. Just sing. So that’s what I did. And Sondheim [the composer] is probably weeping after this performance!

Did karaoke help you with building up that self-confidence too?

JD: Karaoke? To be honest with you, I’ve always been frightened of karaoke, so I’ve never tried it. Karaoke scares the hell out of

Tim said that karaoke can be frightening, unless you’re drunk.

JD: Yes, but I’ve never been that drunk! And I have been drunk. But not that drunk!

You and Tim seem to have this really powerful connection with each other when you make movies together.

JD: One thing that Tim and I share, is a kind of fascination with people. With human beings, and the human animal. I think that we also share the same idea about most people in life, especially the ones who are considered super-normal.

You know, if you really take a step back and observe them and watch them a bit, you’ll realize that they’re actually completely out of their minds! Most people are really nuts, and that’s fascinating. And I think that Tim feels the same way.

Okay…You based your look of Jack Sparrow for Pirates Of The Caribbean, on Keith Richards. Did you base Sweeney on anybody?

JD: No, it was probably a combination. Early on, Tim and I spoke a lot about silent film. And the king of silent cinema, especially the horror genre, was Lon Chaney. So using him was a great inspiration.

And Boris Karloff is one of the classic iconic images of these monsters. So is Peter Lorre, whom I love. And in terms of sound, it’s hard to say. Iggy Pop, maybe. Iggy has a beautiful, deep quality. And he’s a real crooner.

What was it like dancing with Helena Bonham Carter in the movie? Helena said you could do almost any type of dance, but that you had a hard time waltzing. Why?