Taraji Shares All, Even the Surprising Color of Her Panties

Taraji Penda Henson was born on September 11, 1970 in Washington, DC, where she would one day graduate from Howard University with a degree in Theater Arts. She made her screen debut in Streetwise in 1998, but got her big break a few years later co-starring in Baby Boy opposite Tyrese. Taraji followed that film with critically-acclaimed work in Hustle & Flow and Talk to Me, pictures for which she landed a couple of NAACP Image Award nominations.

She not only turned in a memorable performance as a pregnant prostitute in Hustle & Flow, but made her singing debut on its soundtrack in “It’s Hard Out Here for a Pimp,” the tune which landed the Oscar as the Best Song of the year. Ms. Henson has also appeared in Smokin’ Aces, Something New, Four Brothers, Animal and Hair Show, and has upcoming outing on the horizon opposite Forest Whitaker in Hurricane Season, Brad Pitt in The Curious case of Benjamin Button, and Morris Chestnut in Not Easily Broken.

The stunning single-mom was voted to Black Men’s Magazine’s 10 Sexiest Women list in 2001. Here, she talks about her latest picture, The Family That Preys, where she plays Tyler Perry’s wife, Pam.

KW: Hi Taraji. It’s been a while since we last spoke, back when you were doing Baby Boy. I remember how seriously you were balancing acting with your responsibilities raising your young son as a single-mom. 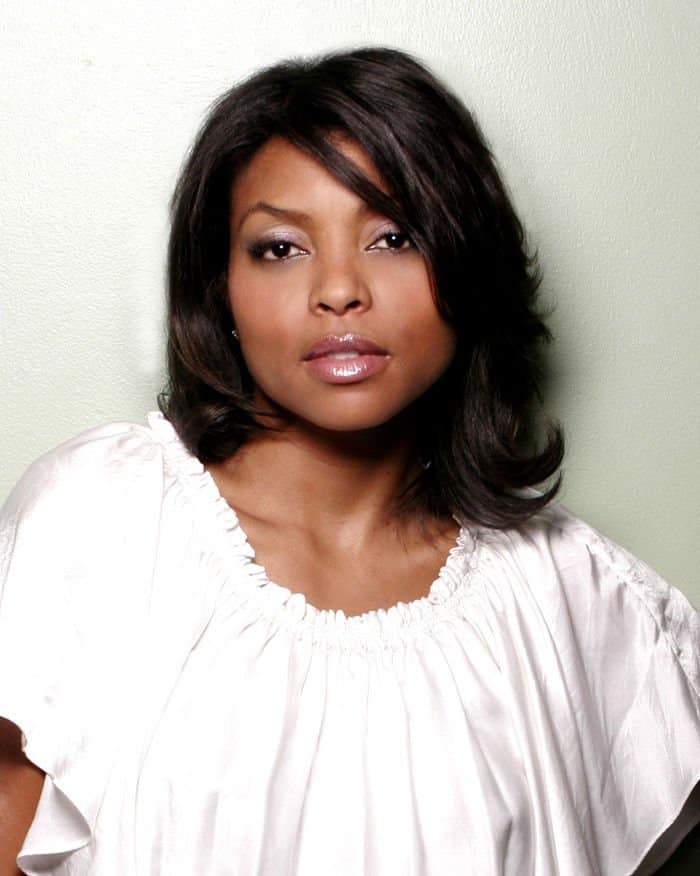 TH: Oh my God! A lot has happened since then.

KW: Marcel must almost be a teenager by now.

KW: Wow! Time flies. How is he doing?

TH: He’s doing great. I’m a mom first, so I’m making sure he’s getting all the nurturing he needs. He’s a freshman at one of L.A.’s top private schools. After he finishes this program, he’ll be able to go to any school in the country.

KW: That’s excellent. Congratulations! So, what interested you in playing Pam in The Family That Preys?

TH: I play a lot of edgy characters, and it was refreshing to not have to work so hard. She’s actually kind of funny. That’s what drew me to her, and that she was a regular girl.

KW: So you weren’t a pregnant prostitute, a lesbian sniper like you were in Smokin’ Aces, or any of the other over-the-top characters you’re known for like Vernell in Talk to Me.

TH: No. It was great to have a chance to play a regular woman who was actually quite funny. I want to be funny. I’m sick of crying.

KW: How was it playing Tyler Perry’s his wife?

TH: Incredible! That man is something to be reckoned with, a force of nature. It was interesting because I had never worked opposite a director who was also acting in the film. My scenes with him were weird because he was my husband. He’d clear the set, and I’d forget and still be standing there waiting for the director to show up. I’d be like, “Oh my God! You’re the director. Sorry!” So, that was different. But just watching how this man works was like nothing I’ve ever seen in life.

KW: And how was it working again with Sanaa Lathan?

TH: I didn’t really get to work much with her in Something New. This time we really had a chance to get down together and it was wonderful. That was what I was really looking forward to. She and I are both Virgos, so we’re so much alike, and yet so different. It’s a beautiful combination. I often tell her that if you could combine the both of us together, you’d have the perfect human.

KW: And you both have Swahili names.

KW: Hers means “Work of Art.” Is it true you’re related to the Arctic explorer Matthew Henson?

TH: Yes, he’s my great-great cousin. He was the brother of my great-great grandfather. Matthew would send him letters about his travels while out on his expeditions. Somebody in the family had all this great correspondence until one day when their apartment was robbed and the letters were lost, probably thrown away like trash.

KW: What a tragedy. Do you think you get any of your adventurous spirit from your famous ancestor?

TH: Absolutely! I think I get my survival skills from him, and also my belief that nothing is out of my reach, that I can achieve anything, if I apply myself. I never quit. I think that’s something I was born with from his genes.

KW: Did you get an Oscar when “It’s Hard Out Here for a Pimp” won Best Song?

TH: No, because it went to the songwriters. But Craig Brewer, the scriptwriter and director of Hustle & Flow called me and told me that he wanted me to take it as my quiet victory, because the song was clearly nominated because of the context and how it threaded into a pivotal moment in the movie. So, I feel like I had a lot to do with the song’s success.

KW: Plus, you performed it onstage on Oscar night. The Columbus Short question: Are you happy?

KW: What’s been your biggest disappointment?

TH: My biggest disappointment? I haven’t run into it yet?

KW: Bookworm Troy Johnson question: What was the last book you read?

KW: The music maven Heather Covington question: What music are you listening to right now?

TH: I’m a huge jazz fan, because everything stems from jazz, in my opinion. I have over 6,000 songs on my iPod, but that’s not even my entire collection. I started collecting music in college. I would have to say that John Coltrane’s “A Love Supreme” is my favorite of all time. That and “Kind of Blue” by Miles Davis.

But I just love it all, hip-hop, too, because I was around when it was born. I buy music every week. Depending on my mood, it may be old funk, classic soul, R&B, Nine Inch Nails or punk rock. I’m very versatile when it comes to music.

TH: What color underwear am I wearing. [Laughs] No.

KW: Okay, what color underwear are you wearing?

TH: I’m not wearing any. [Laughs] You know what, no, I don’t know. I can’t really think of a question.

TH: As one of the greats.

KW: Thanks so much for the time, Taraji, and best of luck with everything.