While Uwe Boll’s controversial movie “Postal” releases on DVD this week, a real mailman turned filmmaker tweaks his independent violent revenge film “One Long Day” for its world premiere at a Las Vegas casino in December.

Keith Mosher, who is writing a book on his film’s journey from dream to screen, has spent the past five years as a Las Vegas city carrier for the United States Postal Service working 11-hour shifts. Stuck in the rut of his job, Mosher decided to do something about it. Instead of arming himself and “going postal,” Mosher picked up a camera.

So while he still made sure to delivery mail to residents of Sin City, the 37-year-old has also been busy working on his dark comedy/action film “One Long Day” when he’s off the clock. With a budget of roughly $3,000, “One Long Day” was shot in 28 days extending over a 12 month period, with most shooting taking place on Sundays.

The film, which is getting quite a bit of buzz online and almost guaranteed to be a cult classic, features a cast of nearly 30 players, Hollywood-esque stunts, sex, violence, guns, thugs, strippers, explosions, Jehovah’s Witnesses, ball gags, fast cars, Jesus and more. 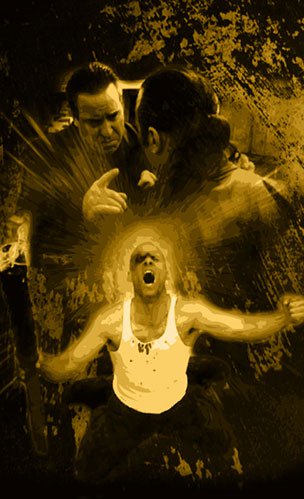 Schaub plays the lead character Gruff, who not only breathes fire, but also gets shot and has a 2X4 smashed over his head. The story centers around Gruff being mistaken as somebody that owes a lot of money to a crime family. When they kill his beloved pet Fluffy, all hell breaks loose as Gruff has one hell of a day seeking revenge “Desperado” style, settling the score with someone… anyone… everyone.

Schaub, a weightlifter and restorer of classic cars and trucks, works in the same office as Mosher and was the first person that was cast in a role.

“Almost two years before we started filming I remember telling Chris I was going to cast him in a movie one day,” Mosher told PollyStaffle.com “He probably thought I was nuts, but I knew way back then, if I ever made ‘One Long Day,’ he would have to play Gruff. Physically, it was a no-brainer. Chris stands “6.4” and is a very imposing guy.”

Currently available for preorder on its official site, “One Long Day” will screen early scenes of the movie at the High Desert Shorts International Film Festival on November 6. The film will have its world premiere and be available on DVD in mid December.