On Wednesday, January 10, Hollywood and art world stars alike gathered at the Los Angeles Convention Center for the Opening Night Party of the 23rd annual LA Art Show, boasting record breaking attendance. 100% of proceeds from VIP Vanguard and Patron tickets, and 15% of proceeds from Friend tickets went to benefit the lifesaving mission of St. Jude Children’s Research Hospital. The Hollywood Sentinel was thankful to be there, documenting night after night of the show, here exclusively for NewsBlaze, as well as additional coverage at the Hollywood Sentinel, and other news sites worldwide.

The LA Art Show’s expansive roster features more than 30 special installations comprising the Featured Programming and DIVERSEartLA lineups, as well as more than 100 galleries exhibiting from all over the world. Throughout the evening, attendees were treated to special performances by Pandemonia, presented by Art All Ways, and of Cristobal Valecillos’ YARE: One More Dance, presented by Timothy Yarger Fine Art.

The LA Art Show opened to the public at 11am on Thursday, January 11, 2018 and ends Sunday, January 14, closing at 5pm. Day One of the Fair featured a lecture by Matthew Modine about his Full Metal Diaries exhibit, Collectors in Conversation Dialogue, and live drawing by Korean artist Jung-Gi Kim.

At 5:30pm under the Littletopia archway, Margaret Keane was honored with a Lifetime Achievement Award, presented by Mab Graves. This was immediately followed by the memorial of JUXTAPOZ co-founder Greg Escalante, presented by Robert Williams. 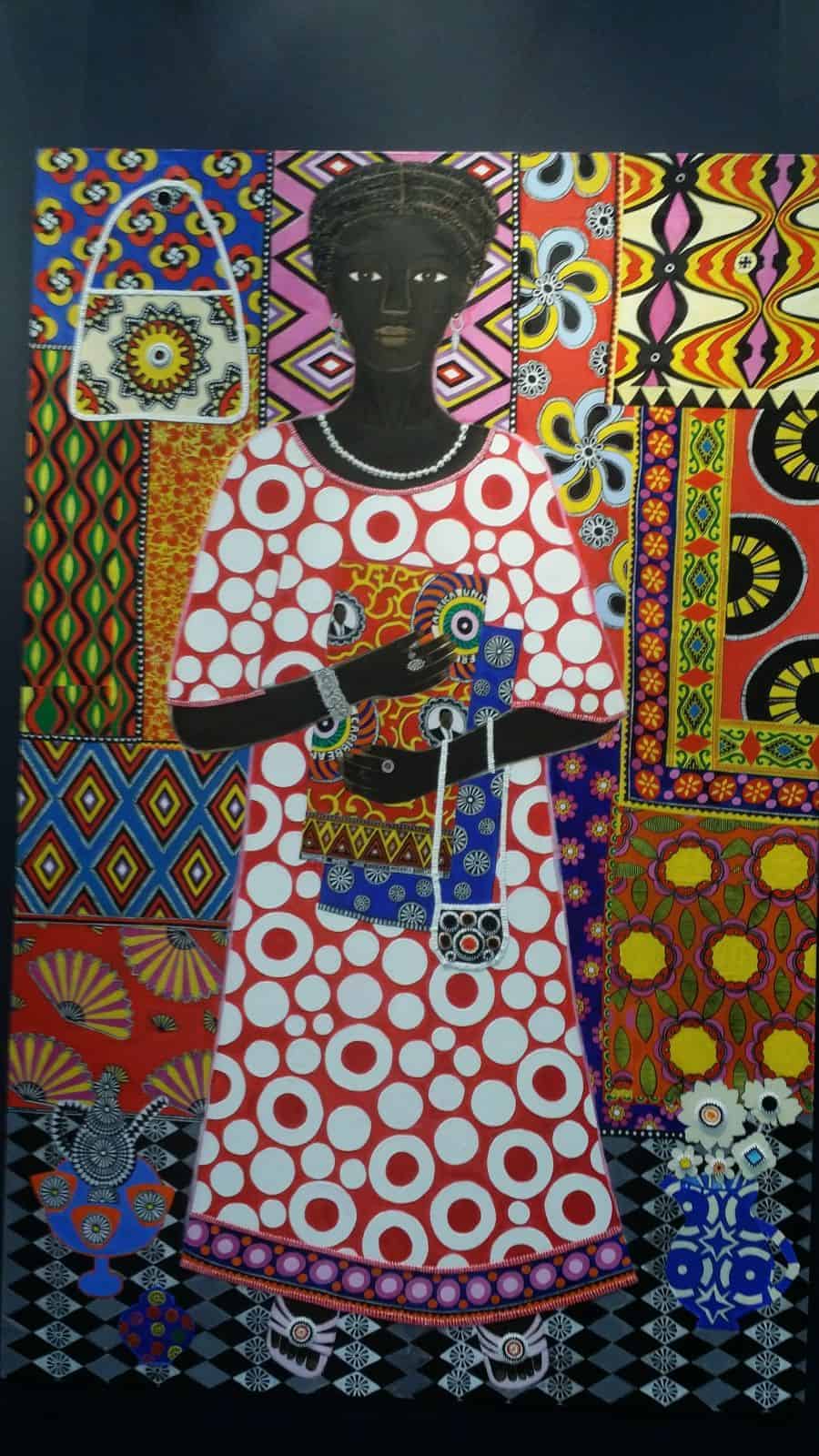 One of my favorite artists at the show, Carla Kranendonk (pictured here) features intricate tribal collage elements in her brightly colorful African tradition, at the Rebecca Hossack Gallery of London and New York. Another of my favorites, also at Hossack Gallery, was John Holcomb’s work, who blends loose figurative images with vibrant hues of color that really pop.

Moira Cue followed her Bruce Lurie Gallery Virtue Series Show last week with her LA Art Show debut. Represented at the show by Bruce Lurie Gallery, Moira’s work attracted major attention by many. Actor Mel Novak is also a new collector of the artists’ work. Bruce Lurie Gallery proved to be one of the hottest galleries at the show – as always, with crowds swarming the gallery booth from every direction. Art work album covers were on display here by none other than Jean Michel-Basquiat, of whom Bruce Lurie gave the legendary artist his first major show in NYC.

Golden Globe and Emmy Award Winner Jon Hamm (pictured) gave a brief lecture at the VIP reception on patron’s night. Jon proved to be a very sincere, kind, and gracious host, discussing his reasons for supporting St. Jude Children’s Research Hospital. St. Jude is quite remarkable, in that it is the world’s best treatment hospital for helping to cure children of cancer, using the latest, cutting edge tools, medical treatments, and technologies, with the brightest and best minds in the field of medicine. It is also even more notable that they are a charitable hospital, paying entirely not only for every penny of the great expense for the children at their facilities, but also for each and every expense associated with the kids’ care including travel for their parents, and even their housing, and more, when needed.

While many of us hear about charities and we may roll our eyes, considering them just another cliché where they rake in a ton of money and the CEO’s get rich, I know that St. Jude’s is a great organization, that truly helps kids in tremendous, life changing, and life saving ways, that is really stunning. I’ve had the pleasure to hear year after year and meet some of the children saved by St. Jude Children’s Research Hospital, and hearing their stories always brings tears to my eyes. Make a direct donation to St. Jude below, or explore the page and buy their merchandise, which also helps save kids.

I’m not a Trophy, by artist Arno Elias, was a hit, promoting the ending of so called trophy hunting of exotic game animals, and an end to sexual stereotypes. Pictured here, Cara Lion, with the subject model being the lovely actress and model Cara Delevingne.

Rehs Contemporary, NY, had some nice works – as always. Really exciting to see was Keane Eyes Gallery, in San Francisco, with Margaret Keane’s work. You can see a great film about Keane, called “Big Eyes,” starring the lovely Amy Adams – who I had the great pleasure to meet two years ago at the LA Art Show. The film is now on Netflix. Keane is now in her 90’s, and still creating great work!

Restrospect Galleries of Australia had some nice works up by Gabriel Moreno. Judy Tuwaletstiwa’s work is very impressive at Bullseye projects in Portland, Oregon. John Natsoulas Gallery in Davis, California, has some really nice works by William Maul and Roy de Forest. I had a nice talk with gallerist John, who knows well how to deal with buyers and the press. Samuel Lynn Galleries, in Dallas, Texas, also has some very nice works, and Sam also seems like a nice guy. Some works by David Burlick were here, which were nice to view, being represented by his estate. The Burliuk Committee are now working on the artists catalog raisonne.’

Ling Art had some very nice pieces including from Zhang Hui from Shanghai, and Tony Song, who is now based in Los Angeles. Ronin Gallery has some great Japanese prints, hailing the “largest collection in the U.S. of Asian Contemporary art prints.” Paradigm Gallery at littletopia featured some very nice works. Kevin earl Taylor’s piece at Cordesa in LA was very nice. Dansaekhwa IV’s work Internal Rhythm 2017-53 at SM Fine Art Gallery is an important work. The National Exhibition of China featured Liu Yilin, who had many great works including the bright and colorful Water, the Principal of all Things, and Habitant. Maxwell Alexander Gallery in LA had some nice works. Pigment Gallery from Barcelona was back with some outstanding pieces.

Several galleries had some nice Andy Warhol prints. Cristobal Valecillos had some very nice tribal type masks and other works, with Timothy Yarger Fine Art in California. Cristobal was a very cordial artist and Yarger is a fine gallery. The Infinity Boxes by Matt Elson were very cool, which I will discuss in more detail in another article here. Flash Bulb by Pandemonia in her full latex outfit and face mask was very cool, from London, who I will also discuss more later in detail, as she has created with her fashion, a living conceptual fashion art pop piece that warrants special attention.

The most exciting works to me here, aside from that by Margaret Keane, the stunning masterworks at my always favorite M.S. Rau Antiques, New Orleans, and Bruce Lurie Gallery in Culver City, California with works by Basquiat and my client Moira Cue, is the stunning Gil Cuatrecasas at ADG / Red M in New York. I will cover this and my other noted favorites above in further articles here at NewsBlaze and at Hollywood Sentinel.

The LA Art Show never ceases each year to amaze and impress me. This year is by far no exception. It is always a great honor to be treated so well by this great organization; the LA Art Show, which ranks right up there with the Golden Globes, Grammys, and Oscars, as one of the most important and exciting events in Los Angeles each year.