The Online Church of Black $yientology an organization once believed to be a black power movement has taken a surprising new stance on color elevation. As of April 2nd 2019 the church has launched a new social media movement using the hash tag #SayGoodbye2Black.

The concept behind the hash tag is that the Black Lives Matter Movement has been a failure in their eyes and needed to be re-evaluated. And in doing so, the only logical conclusion was to accept that under a white nationalist system, Black Lives “Don’t” Matter. Therefore, the only way to end inequality is to destroy color identities all together – leaving nothing to focus on but ones on humanity rather than the color of their skin.

Dr. Martin Luther King said : I have a dream that my children will one day live in a nation where they will NOT be judged by the color of their skin, but by the content of their character.

#SayGoodbye2Black is believed by $yientologist to be the only means of making that dream a reality. But before this hash tag can become a powerful symbol of having enough of racism – the user must honestly ask themselves the question “Are You Tired of Being Black“? 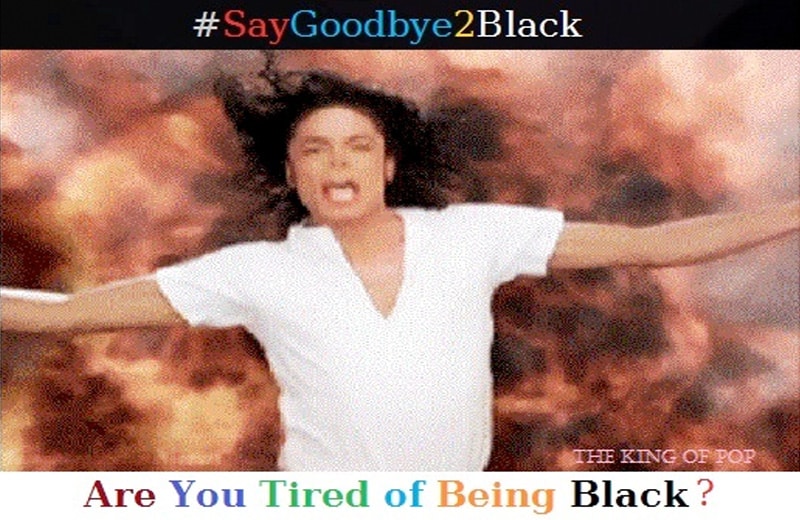 And once we become honest with ourselves by acknowledging the truth of that, we can utilize Facebook and Twitter by “posting our frustrations” with being black in America – using the hash tag #SayGoodbye2Black. And with this one act we can publicly divorce the color black which is hindering us from entering into the collective group of humanity.

And as this movement grows, it will demonstrate to other races the need to divorce the colors that stigmatize them as well. And maybe one day this movement could even spawn the hash tag #SayGoodbye2White and put racism in America in its grave once and for all.

So to help popularize this movement The Online Church of Black $yientology adopted the song Black or White by the king of pop Michael Jackson. A song which accurately describes the meaning of this movement, while revealing that the concept has always been on the minds of those who could see over the walls of racism.