The latest title from Nobel Laureate J.M. Coetzee is Diary of a Bad Year (Viking Books, 2007), a work of experimental fiction presented with a collection of the author’s nonfiction journal entries. Politically insightful and structurally simple, the book presents the author’s views in form of short and somewhat random musings on various topics ranging from world politics to concepts in the humanities and social life.

The fiction story runs parallel on the same pages but is told in two first-person voices: an aging writer, who bonds subtly with his newly hired young woman for typing his book; and the young woman who realizes the change in her own life after being employed by the writer, something that ultimately makes her leave her covetous boyfriend. 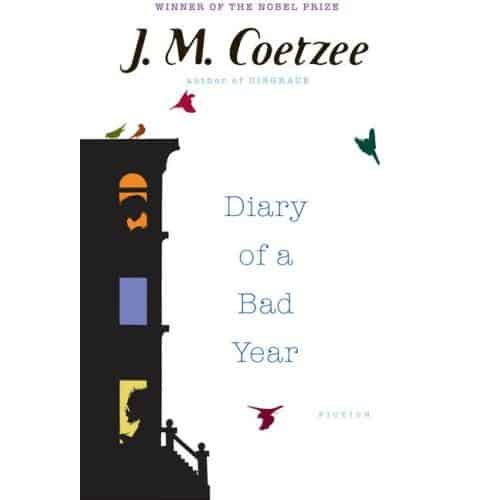 Diary of a Bad Year remains a good reading experience only for the first few chapters when Coetzee’s political commentary intrigues the reader toward some grand unfolding in the coming pages. However, it never arrives; instead, the book underwhelms for more than one reason.

First of all, the desultoriness with which the author hops from one topic to another – thematically unrelated – topic destroys the book’s coherence. Few of the topics are developed to a thought-arousing level and the author’s person continues to overshadow his views. That also holds for the story in which the characters feel like ‘voice generators’ for communicating the author’s mind and not as palpable human figures. There is no climax and the book remains as plain at the end as at the very beginning.

Labeling the book as ‘fiction’ is another point that leaves the book at a loss. There is no ‘true’ fiction in the book. Of course, a critic should be pointing to the publisher, and not the author, for erroneous categorization of the book.

Then there is the format of the book – three different modes of speech on the same page – that seriously interferes with the reader’s struggle to connect coherently to the content. Coetzee is generally critical of almost everything he mentions but he could have made it a good work had he only taken some time to write more and made a little effort to keep himself from egotistically popping up over and again in every page.